In the final chapter of Triad’s 2020 tech trends eBook nearly 300 technologists shared their views on blockchain, its potential, application and adoption.

Blockchain promises to be the great disruptor yet, so far, it has only made surface ripples. It is a technology more talked about than actively deployed.

Bernard Marr, writing in Forbes, places his cards firmly down on blockchain’s table:

‘2020 could finally be the year when blockchain, essentially a digital ledger used to record transactions that can be secured due to its encrypted and decentralised nature [will breakthrough].

During 2019 some commentators began to argue that the technology was over-hyped and perhaps not as useful as first thought.

However, continued investment by the likes of FedEx, IBM, Walmart and Mastercard is likely to start to show real-world results, and if they manage to prove its case, could quickly lead to an increase in adoption by smaller players. And if things are going to plan, the launch of Facebook’s own blockchain-based crypto currently Libra, in 2020, will create quite a stir.’

And Bernard Marr is not alone in his belief in the potential blockchain offers organisations.

‘Blockchain paves the way for uses such as tracing food-borne illness back to the original supplier because it allows multiple partners – who don’t know each other – to safely interact in a digital environment and exchange value without the need for a centralized authority.

By 2023, blockchain will be scalable technically, and will support trusted private transactions with the necessary data confidentiality. According to a 2019 Gartner survey, 60% of CIOs are expecting some kind of blockchain deployment in the next three years.

Blockchain still remains immature for enterprise deployments due to a variety of technical issues such as poor scalability and interoperability. However, it has the potential to reshape
entire industries by enabling trust, providing transparency and enabling value exchange across business ecosystems – potentially lowering costs, reducing transaction times and improving cash flow.

Some of the biggest use cases include assset tracking, automated claims processing, internal and shared record keeping, as well as smart cities and IoT.’

There are, of course, many other potential use cases for blockchain.

Let’s just quickly consider a few before we reveal how the tech community is actually viewing the potential impact of it over the next ten years.

But should we believe the hype – is the tech industry jumping on board or waiting to see whether she sails or fails?

When we asked what were the most important developments of the last ten years, blockchain appeared as the sixth most mentioned.

When we went on to ask what the most important developments would be in the next decade, blockchain remained sixth in the list of most mentioned.

It looks like blockchain is not the next big thing for those working in IT, even if it is for those writing about it. We also gave a list of possible developments and asked our senior IT professionals to rank them for future impact (see the future trends chapter).

Of the eight, blockchain received the lowest endorsements for adoptions (51%), was categorised as the least likely – by a significant margin – to develop (11%), the most likely – again by a long way – not to develop (22%) and figured in the top two of tech possibilities that people were just not sure about.

Why is blockchain being shown no love?

To get a sense of exactly where organisations are at with blockchain, and how they feel about its potential, we asked some more specific questions.

We offered possible, ranked responses to the following question:

Considering applications of blockchain, including non-cryptocurrency ones, please select the term that best describes your organisation’s current level of understanding and implementation.

The areas of interest were:

The range of answers were:

Before looking into these let’s see how many of our organisations have fully utilised any blockchain application, or are underway with one, and compare these to those yet to even begin dipping a toe in the water.

Of projects that are fully utilised, underway or simply begun (some), after the general use of blockchain as a resource, it is smart contracts that have gained the most traction.

Cryptocurrency, arguably the most established blockchain application, has very low uptake compared to these two, and using Blockchain on .NET is more or less on par with it.

Blockchain’s adoption under various use cases

‘I firmly believe that blockchain is on the cusp of no longer being referred to as a technology in its infancy. Real-world use-cases are no longer in their proof-of-concept phase and have moved into their respective production implementations.

It is not long before we see major players within every industry laying down the blueprint and highlighting the efficiencies, reduction in cost and all the other benefits inherent with Blockchain technology.’

Blockchain by sector and IT department size

The commercial sector is leading the charge on blockchain (although it’s less a charge than a gentle canter). 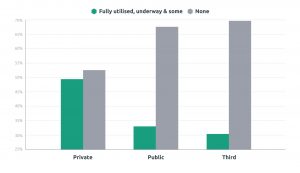 It’s roughly 50% ahead of public and third sector organisations in terms of getting projects finished, underway or started.

Yet still over half (53%) of commercial companies’ IT departments are yet to dabble in blockchain, and over two-thirds of the public sector (68%) and third sector (70%) are still watching from the side-lines.

While we have seen that the uptake of blockchain is very much in its infancy, there are still some surprises in who is proving to be quick on the uptake and who is slow out of the blocks.
Across the four use cases there were just 27 fully utilised projects. These were put in place by just 11 companies (with many investing in multiple uses of blockchain technology).

But were these from small, medium or large IT departments? The results came as a surprise to us..

Size of IT department and fully realised blockchain applications 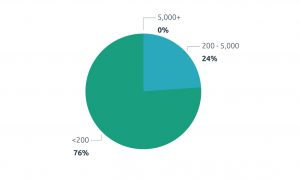 Given that only 11 companies were involved it’s quite possible our data is skewed by a few smaller IT departments with a heavy Bitcoin obsession. But, it’s just as likely that innovation can thrive in smaller departments and projects reach fruition quicker.

We hope you’ve found these insights on Agile informative and helpful. To access this chapter as a pdf and the rest of the 2020 tech trends research results download the full eBook here.