Since this research was conducted the world has changed. We are now dealing with the implications of CoVid-19 at work, at home and in our relationship with technology.

Two of the obvious tech leaders during the past decade were cloud and mobile phones/smart devices. Having witnessed the wholesale impact on society during CoVid-19 the importance of these two areas of technology is undeniable and despite the fact that these technologies have existed for some time the current climate has caused a sea-change in usage.

Of course, future developments will deliver massive benefits but, it is worth pausing for a moment to applaud the fact that the now omnipresent cloud and smart devices have made a truly lifechanging difference to our communities.

We have already had ten years of exciting and ground-breaking innovation, disruption, opportunity and challenges in tech. We asked our respondents exactly:

What do you see as the most significant technological development of the last ten years? 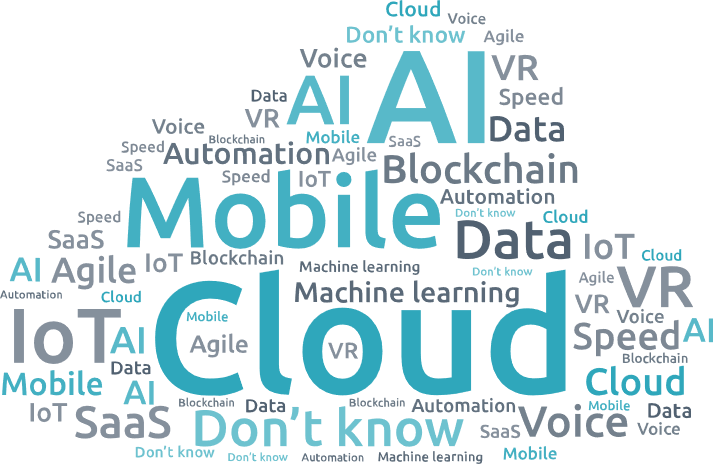 Cloud, mobile and AI have been the developments that have dominated the last decade – but will they continue to do so?

We wanted to start our understanding of future trends by gathering views on how some established technologies and behaviours might change in the future.

It will come as no surprise that digital transformation is widely seen as set to continue. It received the largest number of people predicting an increase – by answering ‘increase significantly’ or ‘increase’. Digital transformation was predicted to increase by 83% of respondents, compared to 67% for Agile, 60% for  the use of third-party suppliers and 59% for legacy challenges.

How will these trends change over the next ten years?

What’s extremely refreshing to see that the biggest decline predicted is for legacy challenges (16%). Even more heartening is that the promise of more digital transformation (83%) is 43% higher than those who foresee an increase in legacy challenges (58%).

‘Investments in digital transformation will continue while organisations, in any sector, still need to drive down costs. Leveraging new technology is a smart way to offset the costs of their current processes, of which employment is the highest. Given the current economic conditions with new constraints like Brexit, and its related costs, transformation project scopes will need to shorten while Legacy systems will be excluded – until it hurts to keep them as it.’
Indy Reddy | Technical Architect

The next ten years

We went on to ask ‘what you see as the most significant technological development of the next ten years?’

What do you see as the most significant technological development of the next ten years? 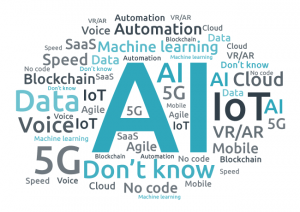 Noticeably, cloud and mobile have completely disappeared from the big picture, replaced by more hardcore tech.

The dominant trend by far is AI

More than a third (37%) of respondents mentioned AI and, discounting the large number who didn’t give an answer (‘don’t know’), it was identified as the big trend of the future by nearly a half (46%).

Clustering around AI are automation, data, IoT and machine learning, as can be seen the following quotes:

‘Artificial intelligence and machine learning will mature to enable widespread changes to working practices and not just niche applications.’
‘Automation and AI will dramatically change the employment landscape.’
‘Artificial intelligence in all its forms – supporting more automation/business efficiencies and superior, personalised customer experiences.’
‘AI will allow us to move to significant task automation in all areas of life.’
‘Adoption and use of AI and machine learning will radically reform both the workplace and the socio-economic landscape.’
‘Machine learning and AI will help us make smarter decisions with the data now available but largely unused.’

‘2020 is such an exciting time for new technologies, but AI in particular is an area with enormous potential but where the hype and reality are still some way apart.
However, that will change rapidly in the next decade and there is no doubt that AI’s impact on software development will be huge and cannot be ignored by business and government.’
Robin Knowles | CEO, Digital Leaders

To get a better sense of how the next ten years will differ from the previous decade, here’s a comparison of the last and next ten years. 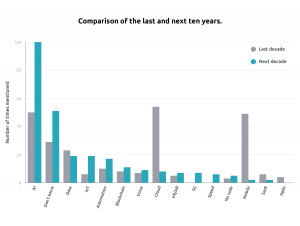 We’ve looked in some detail at the perceived prominence of AI in the future – and it’s links to data, IoT, automation and machine learning.

From looking back to looking forward there is an 86% growth in mentions of AI, 100% growth of machine learning, 217% growth in IoT and a 70% growth in automation.

But what’s also really noticeable is the massive increase (76%) in people not answering the question about the future or indicating they do not know.

There’s nearly a fifth (19%) of tech professionals admitting to have no clear idea of what the immediate future may hold. This uncertainty makes it the second most popular answer after the highly confident and unified identification of AI.

It seems that, in such a busy and ever-changing tech landscape, pinpointing confidently where the future is heading is increasingly difficult, even for those at the heart of the industry.

‘Looking forward, we see cloud and mobile technologies no longer classed as ‘innovations’. However, they remain important as the platform for more advanced toolsets, including AI and IoT.’
Joe Wheatley | Automation and AI Practice Lead, Triad

When responding to an open question, such as ‘what do you see as the most significant technological development of the next ten years?’. the vast majority of respondents only named one or two technologies.

These were most likely the ones that were front of mind – which isn’t to say that others may not be viewed as candidates for growth and impact either.

To try and tease out these areas we asked respondents to rank specific trends and technologies:

How do you believe the trend for the following will change in the next ten years across your sector?

Despite the indication that AI will dominate the next decade, when asked to rate the future adoption of emerging technologies, the results reveal that several technologies are seen as leading the way forward.

There is very little in it between voice (including real-time translation) which 88% saw as being increasingly adopted, AI in relation to augmenting software (87%), chatbots (85%) and IoT/edge (81%).

How do you believe the trend for the following will change in the next ten years across your sector?

‘Technologies like AI (both ML and chatbots) and blockchain are firmly on our roadmap but, the biggest challenge to adoption is the availability of talent in these areas. Their newness means
that there are fewer experienced engineers and demand for them is high.
So, you have to approach it differently. At SoPro and our G33k businesses, we are increasingly moving from a fully employed development infrastructure to working with experts in these
fields to build the IP that we need.‘
Rob Harlow | CTO and co-founder, SoPro and G33k Holdings