Triad’s UX team is run by UX consultants, Jenny Lardh and Lucille Harvey. In this, the first of a series of UX blogs, Lucille gives us a very personal tour around her UX world.

UX stands for ‘user experience’ and at Triad, my job is to ensure that the user’s experience is a good one. UX’ers work on the UX of a system, product, or service. There are two main roles of a UX specialist: design and research.

The art of UX design (UXD) is to create systems, products or services that provide seamless and pleasant experiences to users. User researchers (UR) try to understand the user’s needs, goals and feelings and adopt various methods to uncover problems and design opportunities. There is also user interface (UI) design, UX writing (which includes content design), and service design.

What I like about this Venn diagram (care of UX Collective ) is that it illustrates the tension that lies in UX. We sit in the middle, working with disciplines who, at times, can share conflicting purposes, and with this comes the opportunity for collaboration. 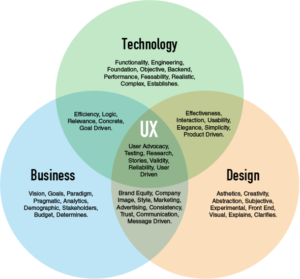 What skills do you need to work in UX?

Working in UX, you draw on many skills. UR is defining the problems, UXD is solving the problems and then UR comes back again to test that the solutions solve the problem. Communication is an important skill. If you’re in the research stage, you’ll be spending a lot of time planning for, conducting, and then analysing user interviews: there’s a real skill to user interviews. I’ve learned that one of the best ways to encourage a user to talk, is to not talk.

One behaviour that is possibly unique to UX is that we like to be wrong. Being able to accept that you’re wrong and being able to learn from being wrong is important. I’d argue that the art of UX is not to try to get it right the first time. You learn and iterate from being wrong and that’s how great products are designed.

Having courage and being curious helps. What worked in one user group or one target market, may not work in another. Having a curious mind when it comes to your target user is beneficial, but you sometimes must be courageous to admit you were wrong and to voice that opinion in the first place.

Many of the UX principles and theories stem from psychology, but the essence is in enabling all users to have a great experience at whatever they are doing.

Reed Hastings said, “If the Starbucks secret is a smile when you get your latte, Netflix’s secret is that the Web site adapts to the individual’s taste.” And he should know. Hastings co-founded Netflix in 1997. According to Mashable, 15% of the world’s web traffic goes to Netflix. Netflix’s vision is to entertain the world. And they rely on UX to achieve it. Take two features that transform the user’s viewing experience: skip the intro and the next episode autoplay. Separate features that together, encourage binge viewing. Genius.

And when it comes to making it easy for the user, I can’t help but marvel at the simplicity behind the map of the London Underground. Technically speaking, Harry Beck’s 1931 masterpiece is a diagram. 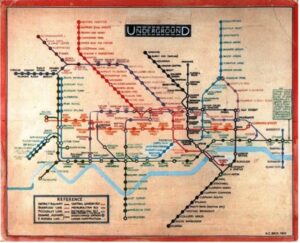 It was a labour of love for Beck, an engineering draughtsman who designed it in his spare time and was successful because, unlike his predecessors (all map makers), he created something that the user needed; a simple take on a complex thing. That’s what UX is about, doing the hard work for the user so they don’t have to, so they have it easy.

In my world, a design is like a joke; if you must explain it, then it’s a bad one.

What I love about UX, is the real difference that it can make. One of my last projects was designing the interface for psychiatrists to conduct yearly check-up appointments for bipolar disorder. The UX approach meant we could ‘design out’ the potential for clinical errors and make it as seamless as possible from the patient’s perspective. It was really rewarding to know that this project enabled the doctors to increase their patient contact time.

UX and the future

It is the fact that UX plays such a vital role in everything we do, that makes UX an in-demand skill. LinkedIn identified UX design as one of the top ten skills. InVision’s ‘Product Design Hiring Report’ revealed that 70% of people managers increased the headcount of their design team in 2019, with UX design teams expecting to grow by an average of 21%. And that was before Covid. Since then, The UX design Institute has reported increased demand for UX and digital skills, as companies expand their online capabilities. And competitive advantage will be won by companies with better UX than their competitors.

John Dennehy (founder of IT recruitment company, Zartis) says “many internal and agency recruiters struggle to fill UX roles because there’s a knowledge gap. As a result, many UX roles remain unfilled.” Dennehy says the increased demand for UX designers is now reflected in salaries, explaining “UX was, for many years, the poor cousin of software development in terms of pay. Today, UX developers are generally paid at least as much as full-stack or back-end developers.”

And there you go. That’s my whistle-stop tour of UX. If you enjoyed reading this, then check out our next blog where Jenny and I will be talking about what it’s like to work in UX.