How to optimise test automation on Agile projects – Part 2

In part 1 of How to optimise test automation on Agile projects, I shared some key points about automation test objectives and selecting suitable automation tools.

In part 2, I move on to cover the key things we consider while creating and running automation tests at Triad Group Plc for our customers across the private and public sector.

We always advise clients to create test automation sub-tasks under the user stories, so that the automation test scripts can be implemented at the end of the current iteration, or at the beginning of the next. In addition, this will help in tracking the progress of automation tests and the test coverage.

Here are a few things to consider when creating automation test scripts:

Reusability is one of the key reasons for considering test automation. So, consider this aspect in your automation test strategy, as not only does the reuse of test scripts speed up the automation process it is also a major contributor to making the process cost-effective.

Ideally, you will create a reusable framework that can be optimised for testing across other device platforms or for other projects, giving due consideration to concerns like maintainability and execution time.

As part of a test automation strategy for an Agile project, we always try to implement an automation test pyramid, as it sets clear expectations and helps increase the test coverage. 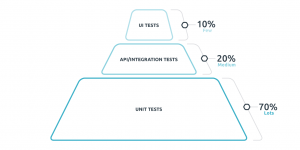 Always try to employ the same version control tools as the developers. It keeps the automation testing in line with the project tech stack and the synchronisation helps avoid mistakes.

All unit tests and integration tests can, and ideally should, live in the main repository with the application. UI automation tests may be better held in a separate remote repository as these tests depend on third-party tools.

A CI/CD pipeline helps to automate steps in the software delivery process, such as initiating code builds, running automated tests and deploying to different environments such as integration, staging and production.

A pipeline procedure is triggered when code is committed to a repository hosted somewhere like GitHub or Bitbucket. This pipeline can build the application, execute unit tests and report the results.

Even with good test scripts, it is difficult to find bugs through automation if there is no adequate reporting available. Clear and comprehensive reporting helps us to reach a conclusion after script execution has completed.

The reporting format might be different for each tool, but should be easily understood. It also helps to include screenshots in test reports. There are many third party reporting tools available in the market.

The main challenge for the QAs on any Agile project is the amount of regression testing that needs to be performed before each release. This can be significantly reduced and other benefits secured using automation testing as described above.

You can magnify these benefits by always trying to integrate your test automation strategy into your Software Development Life Cycle (SDLC), including different levels of testing such as unit, integration and UI.

Ensure you think about the test automation pyramid while creating your test scripts as creating more UI tests will make your automation slow, it will become out dated quickly, and be difficult to maintain in a long run.

Test automation is a long term investment but opportunities exist throughout the process and its different facets. For example, you can get a quick ROI when you run your test scripts in CI/CD pipelines as part of the release process.

Selecting tools that fit into the project tech stack and the way the team works will help you realise those benefits much faster; while thinking about reusability and maintainability whilst developing your strategy through to your test scripts is key. Finally, without clear and comprehensive reporting against objectives agreed on by the whole team, it’s hard to convince others of the scale of benefits automated testing can bring to Agile projects, which are immense when implemented correctly.