In an earlier eBook; ‘Agile methodology: Friend or foe? we discovered how 60 C-suite executives were establishing Agile in their businesses.

So, in the 2020 tech trends survey it made sense to continue our exploration and take a deeper dive into the issues surrounding Agile.

In terms of general perceptions, Agile barely registers at the top of the mind when IT professionals are asked to name the most significant technological development of the last ten years or in the next ten years. Agile was mentioned by only 2% of respondents as the most significant development in the recent past, and by not one respondent as the one-to-watch for the future. Read the full eBook here.

But, is the fact Agile wasn’t called out as a key tech trend because it is now embedded and accepted – or because it still poses too many issues?

Certainly, when asked specifically about Agile as a trend the overwhelming majority believed it would continue to become more important.

That’s more than two-thirds seeing growth and a quarter seeing its influence staying as is.

Further on in this report, we will see how this ringing endorsement is somewhat muffled in the third sector. And, it’s also worth noting here that the sector most strongly behind Agile is the public sector.

So, let’s dive into the findings when we asked nearly 300 technologists about their attitudes to Agile, its adoption and its benefits or challenges.

How do you believe the trend for Agile will change in the next ten years across your sector? That’s more than two-thirds seeing growth and a quarter seeing its influence staying as is.

What about the size of the IT department – how is this affecting the view of how Agile will trend? How IT department size affects view of Agile trend?

How IT department size affects view of Agile trend With a third of all large IT departments predicting a decline, compared to just 10% across all companies, it’s clear that Agile still isn’t sitting comfortably in enterprises.

Compare this to the 7% of smaller departments who see a decline and the distinction becomes even starker.

We should also note that significantly fewer large departments (60%) predicted an increase than the average across all companies (67%).

What issues still exist with Agile?

To understand engagement with the different aspects of Agile, we asked respondents to rate their current experience across seven areas.

Considering the introduction and use of Agile within your organisation, please rate the following challenges:

Taking an average of positive and negative experiences across all areas it is clear that, for all the gains being made, there remain significant niggles. Roughly the same amount of people report that things are going in the right direction (36%) as those who are meeting more challenges than wins (35%).

Which areas are proving successful and where are IT departments still struggling?

Budget, finding talent and speed of delivery were all rated low in terms of success (i.e. low in positive sentiment).

It’s interesting to note that external problems to the IT department appear to be at the root cause of Agile’s unsuccessful deployment – budgets, finding talent, achieving common understanding and other departments’ views.

Some of the specific comments made are revealing in highlighting frustration with other departments, organisational culture, availability of talent and with Agile itself.

‘There’s difficulty at Board level with understanding.’
‘Culture.’
‘Integration of inclusive design within Agile is an issue.’
‘The IT team has increased the speed of delivery successfully but the business is having a hard time catching up and being able to implement the products quick enough.’
‘Highly sought-after skills are in great demand, but there’s low availability.’
‘Often the challenge is working for customers who think they are working in an Agile manner, but are not.’
‘Agile is used as an excuse to change requirements until the last minute with fixed delivery plans.’
‘Agile does not apply for a variety of reasons.’

Are the same problems or successes with Agile being experienced across the board? Or do things look very different depending on where you sit?

Earlier we saw that the average prediction of increase, across all sectors, is 67%. However, the average sentiments by sector vary quite significantly.

Positive and negative sentiment about Agile by sector Both private and public share 37% positive sentiment, but the public sector maintains more challenges (with 40% negative sentiment compared to 31%).

Let’s break down this sentiment into specific areas and issues.

Agile sentiment by sector and aspect

Achieving common understanding is a problem for more than half (54%) of third sector organisations.

For the public sector it is achieving cross-departmental consensus that is a major stumbling block, with nearly a half (46%) claiming issues.

The private sector has largely overcome issues of the relevance of Agile for its products and services, especially when compared to the other sectors.

While finding talent remains an issue for public and private organisations (at 43 and 30% respectively), it is affecting nearly half of not-for-profits with only one (12%) in ten finding the talent it needs.

It also appears that budgets are being released for Agile in the commercial world, while nearly half of all public (49%) and Third sector (46%) organisations are still arguing their corner.

‘We can see that many people are still struggling with Agile, across all aspects, which doesn’t surprise me. Adopting an Agile methodology asks organisations to radically change long held attitudes. Therefore, the real issues at stake may be more related to resisting organisational change than it is about the Agile method per se. ’

We’ve already seen how the size of the IT department can greatly influence results and perceptions of emerging trends. Let’s see how it affects Agile.

Positive and negative sentiment about Agile by IT department size 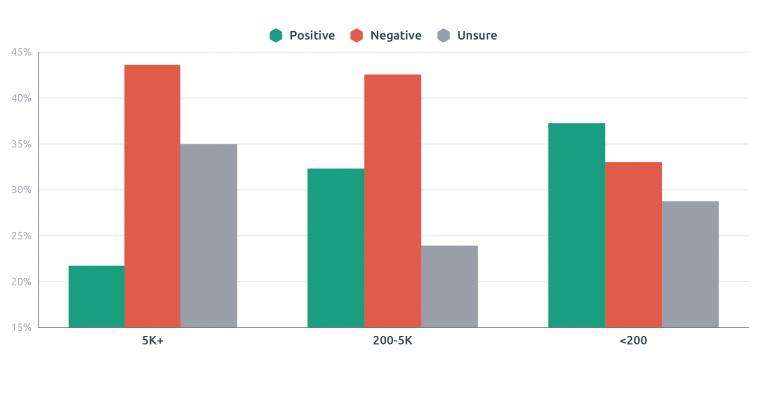 The levels of uncertainty from IT departments of 5,000-plus is significantly higher than the average for all. At 35% it is 46% greater than that for departments of 200 to 5,000 staff.

It could be argued that the majority of Agile’s success has been in departments of less than 200 – this is an issue we explored in our ‘Agile methodology: Friend or foe?’ report.

‘Agile teams rely on swift decision making that is best achieved with small, co-located and multi-disciplined teams, empowered to make decisions. The bigger the team, the greater the cross (or miss) communication overheads, along with the perceived need of a “management” layer to control, command and thus quash creativity. ’

What issues, in particular, are creating challenges?

How departmental size affects sentiment towards aspects of Agile For the largest teams, budget and gaining a common understanding were keenly felt by over half (53%) of the organisations we surveyed.

Compounding this were levels of uncertainty about issues such as gaining the buy-in from other departments (40%), whether there was a fit between Agile methodology and the product/service offered (40%) and whether the team’s skillset was appropriate for the methodology (47%).

The difference in positive sentiment for mid-sized and smaller departments compared to large departments is significant.

‘The public sector has departmental support for Agile deliveries, whilst the private sector has embraced Agile to react to market forces, both having close ties to direct end users and their needs.

Third sector organisations however often have a broader remit, and therefore need greater support to realise the benefits that comes with adopting Agile.’

We hope you’ve found these insights on Agile informative and helpful. To access this chapter as a pdf and the rest of the 2020 tech trends research results download the full eBook here.