The seismic changes we’ve seen to the way we work in recent weeks have come as a shock to many of us, and to our businesses. However, these changes, whilst unexpected and not necessarily welcome, pose opportunities as well as challenges. One opportunity is using this period to bolster your company’s competitive advantage through improving and then automating key processes.

Robotic Process Automation (RPA) is a technology that interacts with computer applications in the same way that a person does, by using the user interface. Because of this it can be programmed to mimic many of the repeatable, rules-based tasks and processes that firms currently employ people to do.

This leads to two key benefits. Firstly, a reduced cost of service, as automations work faster than people and can work 24 hours a day. Secondly, the ‘robot’ doesn’t make mistakes, meaning that you’ll have fewer errors, less re-work and less issues for your customers.

It may seem counter-intuitive, given the state of the economy and the restrictions we are operating under, but now is a good time to engage in an automation journey, for six key reasons:

When a business is running at full speed to serve customers from day to day there is little extra capacity for self-improvement. However, during an economic downturn, such as we are seeing in the majority of sectors, it becomes important to review daily activities. Such changes can provide extra capacity for doing things that previously might have been considered but not actioned. A virtual workforce assessment that will analyze your operations and highlight process and technology improvements may very well be one of those things.

For a process to be suitable for automation it must have digital inputs. We are seeing a large increase in white-collar remote working during this crisis, with many companies operating in a distributed fashion from necessity. The nature of more remote working forces the digitisation of information as it flows between people; these changes open up new processes for potential automation. 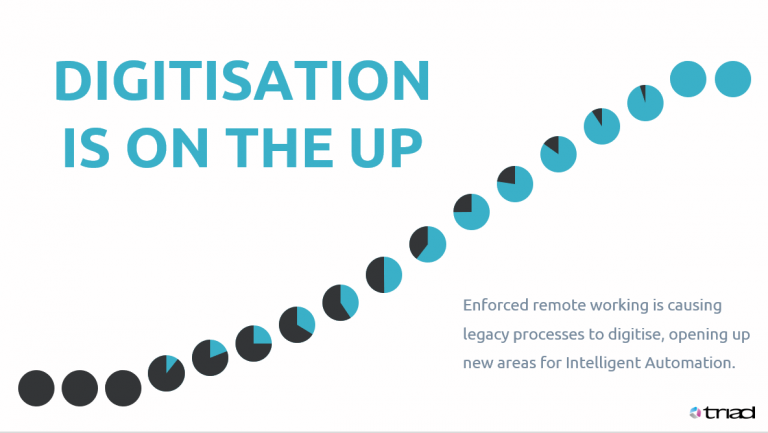 One of the best-known change management models is Lewin’s ‘unfreeze-change-refreeze’, where new behaviours are brought about by an ‘unfreezing’ or forced change, as is happening now. During the transitional period, new behaviours are adopted which are then reinforced as the organisation ‘re-freezes’.  It is at moments like these that it becomes much easier to introduce other proactive changes at the same time, which will then be reinforced as the economy returns to a more ‘normal’ state. Continuing on a similar theme as the above, there is often resistance to introducing automation into a business, for fear that it will displace people or significantly change the way that they work. Resistance can come in many forms but one phrase that is heard often is that automating a process is not necessary because “we’ve always done it like this”. With the current changes in how we work together, and serve customers and service users, this stance has already imploded and a significant barrier to engagement is therefore removed. Imagine the scenario, you’ve decided to start assessing your “as-is” processes and you need your team to show a business analyst how they perform a specific process or task. When we’re not remote working this often involves co-locating with them and performing the work (sometimes repeatedly) and explaining while they make notes and query the actions. When performing this capture phase of understanding existing processes remotely, screen recordings become much easier and can be done seamlessly using remote collaboration tools. 6. You should be preparing for the upturn

Improved efficiency, consistency and responsiveness are all core benefits of a successful automation initiative. Improvements to your processes will have a knock-on effect on your ability to serve your customers; increasing customer retention and new customer acquisition. When emerging from this downturn, improved scalability will be a key competitive advantage and will enable you to outperform and out-grow your competitors. This was shown by the many companies that invested in themselves during the 08/09 financial crisis and then reaped the rewards during the ten-year growth period which followed. We’re all reeling from the effects of COVID-19, personally and professionally, and it can seem unnatural to think of anything more than survival and loss minimization at times like this. Yet, the companies that can do this well, while also looking ahead and planning for future opportunities, are the ones that stand the best chance of succeeding in the long term.

A senior consultant for Triad, Dr Henry Grech-Cini has an extensive range of experience amassed over the last 26 years developing and advising on the use of technology in business. His keen problem-solving skills, and ability to influence at senior levels, have seen him lead solutions-based responses to business challenges across many industries. As a key member of Triad’s RPA team, he leverages AI and automation to deliver tangible client benefits on a regular basis.